The Economic and Organised Crimes Office (EOCO) is on the heels of former heads of some state institutions over massive rots leading to financial loss to the state.

Over US$44,306,262.51 have so far been uncovered as misappropriated funds from the previous managers of the Microfinance and Small Loans Centre (MASCLOC), Ghana Free Zones Board and the Bulk Oil Storage and Transportation Limited (BOST).

EOCO’s probe started following a forensic audit into the financial transactions of these institutions under the previous John Mahama administration.

According to the audit conducted by private auditors and presented to President Akufo-Addo and his cabinet, the former CEO of MASCLOC Mrs. Sedina Tamakloe Attionu allegedly misappropriated GhC3,193,592 (US$641,928.51) during her tenure.

Also, whopping amounts of GhC3,919,622 and US$1,622,821 is hanging on the head of the former CEO of the FreeZones Board Mr. Kwadwo Twum Boafo as misappropriated cash after the special audit report sanctioned by Cabinet.

Details of the audit have been forwarded to EOCO to act on them. Below is a section of the report submitted to cabinet: 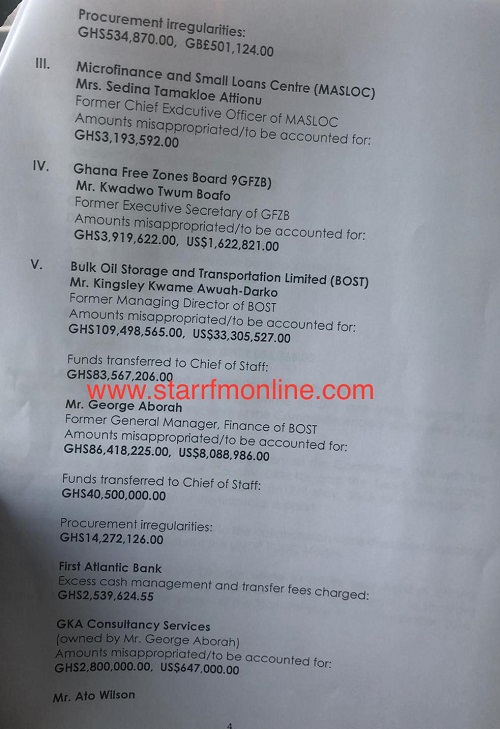 Three dead in accident at Oboho