At least 40 people have been killed after a bus travelling from the Kenyan capital Nairobi to Kisumu, in the west, veered off the road, police say.

Many reportedly died at the scene of the accident and police fear the death toll may rise with the possibility of passengers trapped in the wreckage.

“The roof of the bus was ripped off,” an official said.

Police said the driver had lost control and plunged down a slope at a notorious accident black spot. 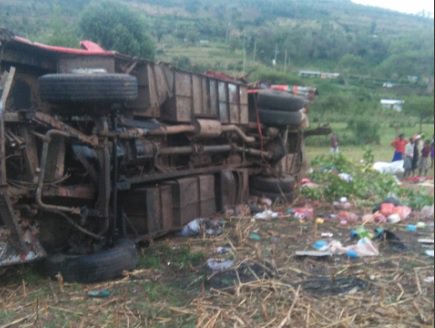 Children are believed to be among the dead.

Highway roads in Kenya can be notoriously dangerous.

Last December, some 36 people died in a head-on collision between a lorry and a Nairobi-bound bus on a road near Migaa in Kenya.

Brexit: UK will not be ‘trapped’ in backstop, May to tell EU

The Indian village where people play with live scorpions